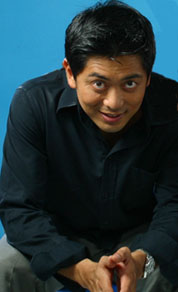 A pioneer of observational style standup comedy in the Philippines and Asia, Tim has been performing his brand of humor to audiences from all over the world except in Germany, where they frown upon Nazi jokes. Tim started his comedy career back in 1997 in San Francisco, California to a full capacity audience of 4 people, including the homeless bum he paid to keep the audience real. He quickly got work in prestigious clubs such as the Punch Line and Cobb’s after helping the waitstaff move furniture at closing. After the dot-com bubble burst in 2002, Tim sold his belongings and packed his bags to explore the world and produced his quirky international television program “On-Foot” (which airs on the Living Asia Channel and The Filipino Channel). Tim’s material covers his experiences from growing up in the Philippines, living in the States, and the absurd things he finds everyday. Aside from performing standup comedy, Tim writes for travel and lifestyle magazines, and hosts television shows and corporate events. Tim has performed in various cities in the U.S.A., Philippines, Hong Kong, Singapore, Malaysia, France, and the Middle East. He was recently named one of Asia’s Top 10 Comedians.

Tim has performed in the following venues: